The synthetic fuel supply at Westinghouse Electric's gas turbine laboratory in Lester, Pennsylvania, in 1971. In 1970, Westinghouse obtained a contract under the Environmental Protection Agency (EPA) and, later, the U.S. Department of Energy (DOE), to develop a gas turbine capable of burning low-BTU gas, as could be produced by gasification of coal. This was the beginning of the DOE's "clean coal technology" program that continues today. This photograph shows the line-up of compressed gas tank trucks that delivered compressed low-BTU gas for use in conducting combustion testing of gases with approximately 150 BTU/scf, only 15 percent of the heating value of natural gas, the usual fuel for gas turbines. 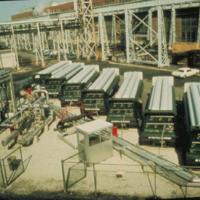