A synthetic gas and standard fuel nozzle for the Westinghouse 501B (W501B) gas turbine. The newer low-BTU gas nozzle, shown on the left, is substantially different from the older nozzle, shown on the right. The low-heating value fuel test gas had only about of the energy content of natural gas, requiring 10 times the nozzle flow area. 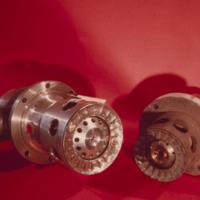