The Westinghouse 501D5 (W501D5) combustor, designed for future synthetic gas use. When the new W501D5 was introduced in 1980, the combustor basket design showed evidence of what was learned under the U.S. Department of Energy's (DOE) test program. The W501D5 combustor basket on right features larger head-end to be suitable for burning low heating-value gas. 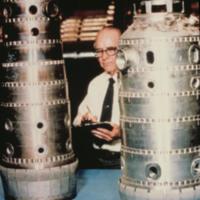