Westinghouse Electric's synthetic gas Process Development Unit (PDU) that was built and operated at Waltz Mill in Madison, Pennsylvania, beginning in 1972. The U.S. government program under which Westinghouse performed low-BTU gas testing was aimed at the development and demonstration of the Westinghouse Air Blown Fluidized Bed Gasification Process, which makes synthetic fuel gas by partially burning coal in air to create hydrogen and carbon monoxide. 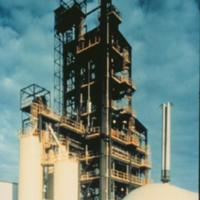