A letter from U.S. Army Major General F. E. Uhl to Edna P. Hancock dated May 10, 1945. In the letter, Maj. Gen. Uhl offers condolences to Hancock regarding the death of her husband, Sergeant John B. Hancock (1913-1944), while serving in World War II. Maj. Gen. Uhl also offers the services of the Welch Convalescent Hospital in Daytona Beach, Florida, for families of fallen soldiers. 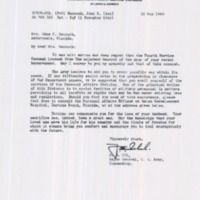