The Fifteenth United States census records for Double Run, Georgia in Hickox County for 1930. The census divides the population into categories of name, age, sex, race, marital status, occupants and relation to head of house, whether the home is owned or rented, value of home or rent, whether home is a farm residence, and whether the home has a radio. It also records college attendance, literacy, birthplace and birthplace of parents, citizenship status, language spoken before coming to United States, year of immigration, occupation or business, class of worker, whether they worked the previous day, military status, and the war or expedition participated in.

A notable individual listed in this record is Major James Lamarr Moore (1923-1994), who appears on sheet 2B, line 78. Major Moore was born to Raymond R. Moore and Nettie Mae Moore on December 14, 1923 in Oxford, Alabama. At the time of the census, James (line 74) was six years old and Raymond Moore (listed as G. R.) was a farmer. His parents are listed on lines 76 and 77, and his four siblings are listed on lines 79, 80, and 1 and 2 on the next sheet. James enlisted in the United States Army on January 1, 1923, to serve in World War II. His military career spanned two decades and he ended his service as a Major. As a civilian, he married twice and had four children and three step-children. He owned and operated GEICO Insurance offices and was also a partner in the Fed Chek organization, where he served as Vice President. He died from heart failure of June 26, 1994, and is interned at Florida National Cemetery in section MC, site 19.He is one of the individuals commemorated in the Veterans Legacy Project. 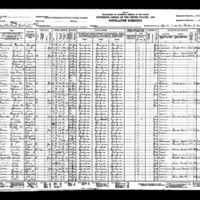