The abstract of World War I military service for Fireman Second Class William Otto Grupp (1901-1988). The document includes Grupp’s name, service number, where and when he enlisted, his age at entrance, rate, home address, a list of where and when he served, his rank at each place he served, the date and place of his discharge, and his rating at the time of his discharge.

Born on April 1, 1901, in Brooklyn, New York, Grupp was a first-generation German-American. He enlisted in the United States Navy on July 5, 1918, at the age of eighteen. He served at several locations, including the USS Indiana. After his service, Grupp married Katherine Riebling, with whom he had two daughters. Grupp died on November 17, 1988, and is buried in the Florida National Cemetery in Bushnell, Florida. 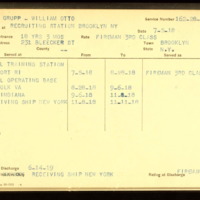