Merrill Hart McGlamery was born in 1924 in Tampa, Florida. He spent his childhood in Tampa and grew up in a large family. In January of 1943, he enlisted in the United States Army and then also served in the United States Marines. McGlamery served in a signal battalion, through which he took courses in radio operation. After his World War II-era service, McGlamery attended Davidson College and graduated Cum Laude and Phi Beta Kappa in 1948. He then re-enlisted in the military and served from 1949-1973. He had a long career as an engineer, including work for General Electric as an electronics engineer. McGlamery was also involved in the space program. He later returned to his home state of Florida and was living in Dunnellon when he passed away in 2000. McGlamery is memorialized at Florida National Cemetery in Bushnell, Florida.

Digital reproduction of original marriage certificate recorded by the Clerk of the Circuit Court, December 22, 1944. 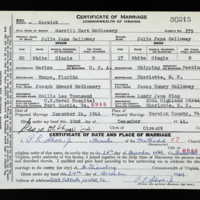