The abstract of World War I military service for Settimo Sorci (1893-1989). The document includes Sorci’s surname, Christian name, Army serial number, whether White or Colored, home address, place of enlistment, place of birth, date of birth, organizations served in, with dates of assignments and transfers, grades, with date of appointment, engagement, wounds or injuries received in action, dates served overseas, date of discharge, and remarks.

Settimo Sorci was born in Italy on January 4, 1893. He came to the United States around 1913. In 1918, he was drafted into the United States Army. During his service, he was transferred multiple times from Company B of the 53rd Pioneer Infantry to Company E of the 329th Infantry, 83rd Division. After his service, he lived in New York and married Anna Giangrasso on November 25, 1924, who was also an Italian immigrant. They had two children: Frances and Anthony. His son, Anthony, served in World War II. After Settimo's wife died, he lived the remainder of his life in Port Richey, Florida. He passed away on April 28, 1989 at the age of ninety-six. Sorci is buried in the Florida National Cemetery in Bushnell, along with his son. 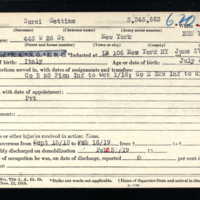