The Fifteenth United States census records for New York City, Borough of Queens for 1930. The census divides the population into categories of name, age, sex, race, marital status, occupants and relation to head of house, whether the home is owned or rented, value of home or rent, whether home is a farm residence, and whether the home has a radio. It also reports college attendance, literacy, birthplace and birthplace of parents, citizenship status, language spoken before coming to United States, year of immigration, occupation or business, class of worker, whether they worked the previous day, military status, and the war or expedition participated in.

A notable resident listed in this record is Settimo Sorci, who was born in Italy on January 4, 1893. Sorci came to the United States around 1913. In 1918, he was drafted into the United States Army. During his service, he was transferred multiple times from Company B of the 53rd Pioneer Infantry to Company E of the 329th Infantry, 83rd Division. After his service, he lived in New York and married Anna Giangrasso on November 25, 1924, who was also an Italian immigrant. They had two children: Frances and Anthony. His son, Anthony, served in World War II. After Settimo's wife died, he lived the remainder of his life in Port Richey, Florida. He passed away on April 28, 1989 at the age of ninety-six. Sorci is buried in the Florida National Cemetery in Bushnell, along with his son. 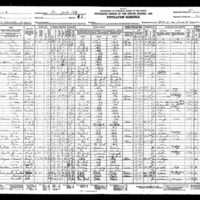