The draft registration card for Willie Roberts (1892-1992), who enlisted in the United States military during World War I. The card contains the demographic information for the soldier including name, age, home address, date of birth, place of birth, race, citizenship, trade or occupation, number of dependents, whether tall, medium, or short, slender, medium, or stout, eye and hair color, whether bald, and disabilities. World War I draft registration cards were completed by approximately 24 million men living in the U.S. in 1917 and 1918.

Willie Roberts enlisted in his hometown of Starke, Florida, on April 26, 1918. He served in the United States Reserve Labor Battalion, Quartermaster Corps till his discharge with rank of private on April 11, 1919. Born on March 25, 1892 in Starke, Florida, Willie Roberts spent his entire life in the state of Florida. He served in the United States Army during World War I. After the war, he married Ruth Plessley he had a daughter named Geneve. Roberts worked in the railroad industry, eventually moving to Jacksonville working as a train porter. Roberts died on February 29, 1992 in Lake City, Florida and is buried in the Bushnell National Cemetery in Bushnell, Florida. 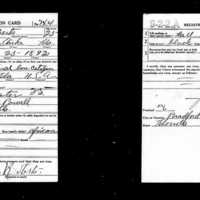