The draft registration card for William Henry Oliver, who enlisted in the United States military during World War I. The card contains the demographic information for the soldier including name, age, home address, date of birth, place of birth, race, citizenship, trade or occupation, number of dependents, whether tall, medium, or short, slender, medium, or stout, eye and hair color, whether bald, and disabilities. World War I draft registration cards were completed by approximately 24 million men living in the U.S. in 1917 and 1918. This registration card for William Henry Oliver notes his physical description (brown hair, brown eyes) as well as his marital status (single). During the war, Oliver served with American Expeditionary Forces in Bordeaux, France. 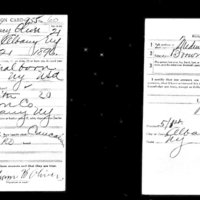