The Twelfth United States Census records for Albany Ward 3, Albany, New York, for 1900. The census divides the population by sex, race, age, marital status, number of children, occupation, literacy, whether they owned or rented, farm or house. The census also states a resident's place of birth, and birthplace of their mother and father. If foreign born, the person provided the year they immigrated, whether they were naturalized and if they spoke English.

A notable resident listed in this record is William Henry Oliver. This is the first census in which William H. Oliver appears he was four years old at the time. During the First World War, Oliver served with American Expeditionary Forces in Bordeaux, France.

In 2017, the University of Central Florida was one of three universities selected to launch the National Cemetery Administration’s Veterans Legacy Program. The program engaged a team of scholars to make the life stories of veterans buried in the Florida National Cemetery available to the public. The project engages UCF students in research and writing and fosters collaboration between students, faculty and local Central Florida schools to produce interactive curriculum for k-12 students. The corresponding website exhibit uses RICHES Mosaic Interface to create a digital archive of related data. The public also can use the project-developed augmented-reality app at more than 100 gravesites at the Florida National Cemetery, where they can access the UCF student-authored biographies of veterans.

Originally created by W.M. Vespermann and published by the United States Census Bureau. 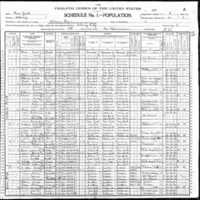