The Thirteenth United States Census records for Norfolk County, Quincey City, Massachusetts, for 1910. The census divides the population by categories of sex, race, age, marital status, number of children, occupation, literacy, whether they owned or rented, farm or house, if they were a Civil War veteran, and whether they were blind, deaf or dumb. A question was added regarding the place of birth and mother tongue of foreign-born persons and their parents. If foreign born, the person was required to provide the year they immigrated, whether they were naturalized and if they were able to speak English.

A notable resident listed in this record is Henry Francis Cavicchi (1896-1991). This is the first census that Henry Francis Cavicchi appears in. Born on September 4, 1896 in Quincey, Massachusetts, Cavicchi was a first generation Italian-American. His father moved from Italy to the United States in the 1880s, where he married a Canadian immigrant and settled in New York. Shortly after Henry’s birth, the family moved to Massachusetts. After working for the family business, Cavicchi Polishing Machine Co., Henry briefly joined the United States Navy in June 1918, where he served during the First World War. When he left the Navy in 1919, Cavicchi returned to Massachusetts, where he married his wife, Emily A. Essex, in 1922. He continued working at Cavicchi Polishing Machine Co. with his father and brothers until his retirement in the 1980s. Cavicchi died on July 30, 1991, and is buried in the Florida National Cemetery. 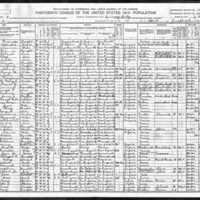