Patent Drawing for Polishing-Machine for Floors

The patent drawing for a polishing machine for floors by Ercole Cavicchi. The application was filed on November 22, 1915, and it was patented on February 18, 1919. Ercole's son, Henry Francis Cavicchi (1896-1991), is one of the featured veterans in the Veterans Legacy Program project.

Born on September 4, 1896 in Quincey, Massachusetts, Henry Francis Cavicchi was a first generation Italian-American. His father moved from Italy to the United States in the 1880s, where he married a Canadian immigrant and settled in New York. Shortly after Henry’s birth, the family moved to Massachusetts. After working for the family business, Cavicchi Polishing Machine Co., Henry briefly joined the United States Navy in June 1918, where he served during the First World War. When he left the Navy in 1919, Cavicchi returned to Massachusetts, where he married his wife, Emily A. Essex, in 1922. He continued working at Cavicchi Polishing Machine Co. with his father and brothers until his retirement in the 1980s. Cavicchi died on July 30, 1991, and is buried in the Florida National Cemetery.

National Archives, Records of the Patent and Trademark office 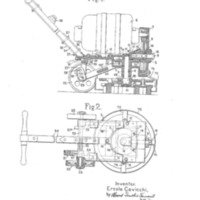