The passport application for Giosue Nasso (1894-1961), which was submitted in Jamaica, New York, on September 29, 1922. The application contains the demographic information for the applicant, including name, height, descriptions of forehead, eyes, nose, mouth, chin, hair, complexion, face, and distinguishing marks, photographs of the applicants, and an oath of citizenship and allegiance.

Nasso was born on October 13, 1894, although his tombstone claims that he was born on December 12, 1894. He came to New York as an Italian immigrant at the age of nineteen. Before he got married to Santina, he registered for the draft on May 29, 1918, and served during World War I. By 1940, Santina and Giosue had four children: Vincent, Peter, Theresa, and Carmen. For the remainder of his life, Giosue lived in Brooklyn. He died on June 3, 1961 at the age of sixty-seven, and was buried in the Long Island National Cemetery in New York. However, he was relocated to the Florida National Cemetery, where he was buried along with his wife. "Together Forever" is written on Santina's side of tombstone.

Originally created and published by the Department of State, Division of Passport Control. 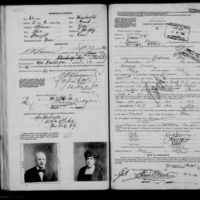