The Thirteenth United States Census records for the Borough of Manhattan, New York City, New York, for 1910. The census divides the population by categories of sex, race, age, marital status, number of children, occupation, literacy, whether they owned or rented, farm or house, if they were a Civil War veteran, and whether they were blind, deaf or dumb. A question was added regarding the place of birth and mother tongue of foreign-born persons and their parents. If foreign born, the person was required to provide the year they immigrated, whether they were naturalized and if they were able to speak English.

A notable resident in this record is George P. McCann (1899-1991). McCann was born on September 12, 1899, to Charles and Annie McCann, who were Irish immigrants. George worked as his father's butcher shop before enlisting in the United States Navy in 1917. He completed culinary school and became a ships' cook. After his service, he married Helen Galvin in New York. They had two children: Thomas Benard and Vincent. When Thomas married a Florida woman, George and Helen moved with them to Florida. George died on April 20, 1991, at the age of ninety-one and is buried at the Florida National Cemetery in Bushnell. 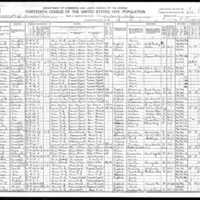