The draft registration cards for Merrill Hart McGlamery. The cards were compiled from multiple registrations beginning in 1940, for men 18 to 45 years old. They include address, age, date of birth, place of birth, and father's contact information. McGlamery is listed as a student at the time, and there is a note on the card saying that he volunteered January 5, 1943, which is a few days prior to his enlistment on January 8, 1943. The card lists his height at 6'1'', his weight as 180 lbs, and describes McGlamery as having blue eyes, red hair, and a light complexion.

Merrill Hart McGlamery was born in Tampa, Florida, in 1924. He spent his childhood in Tampa, growing up in a large family. In January of 1943, he enlisted in the United States Army and also served in the Marines. McGlamery served in a signal battalion, through which he took courses in radio operation. After his World War II-era service, McGlamery attended Davidson College and graduated Cum Laude and Phi Beta Kappa in 1948. He then re-enlisted in the military and served from 1949-1973. He had a long career as an engineer, including work for General Electric as an electronics engineer, and was involved in the space program. McGlamery later returned to his home state of Florida and was living in Dunnellon, Florida, when he passed away in 2000. He is memorialized at Florida National Cemetery in Bushnell, Florida. 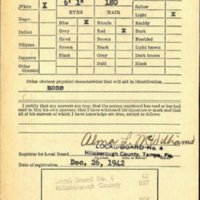 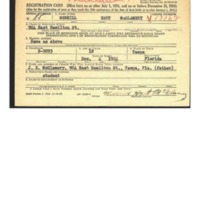