This is a passport application submitted by Harry Carson in June of 1924. He claims citizenship through his father, Meyer Carson, as this is a “Form for Person Claiming Citizenship through Naturalization of Husband or Parent.” Harry includes details about his immigration from Russia to the United States in 1907 and the immigration of his father a year earlier. Harry states on the form that he works as a salesman and is traveling abroad for business. The first page contains his personal information and the second page has his photograph. Harry Carson was born in Russia in 1897 and immigrated to the United States in 1907. Carson and his family were Jewish, and they most likely immigrated to the United States in order to flee persecution and violence that they faced as Jews living in Russia in the early twentieth century. After arriving in the United States, Harry grew up in Rochester, New York. In April of 1915 he enlisted in the US Army and served in the 12th Cavalry Regiment until August of 1919. During his service he may have been sent to New Mexico in order to patrol the US-Mexican border. After his service, Carson worked as an intelligence agent for the FBI. He eventually moved to Florida and passed away in 1989. Carson is buried at Florida National Cemetery.

Originally created and published by the Department of State, Division of Passport Control. 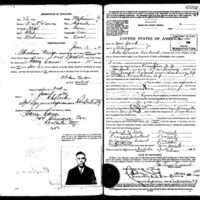 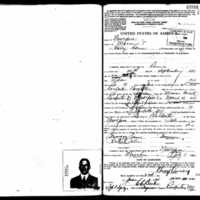