Our Roll of Honor

Fred Kalinchuk was born in Russia in 1896, and immigrated to the United States in 1913. He lived in Cleveland, Ohio with his family before enlisting in the United States Army in 1918. Soon after joining the Army, he became a naturalized citizen while stationed in Georgia. Kalinchuk fought in France during World War I, including in the Oise-Aisne offensive. He was wounded during that time and was awarded the Purple Heart. After his military service, Kalinchuk worked as a patternmaker and started a family in Cleveland. He later moved to Florida and passed away in Citrus, Florida, in 2007. He is buried at Florida National Cemetery in Bushnell, Florida, with his son, Walter Kallin, who served in World War II.

The Davenport Democrat and Leader

The Davenport Democrat and Leader

Originally created and published by The Davenport Democrat and Leader.

Copyright to this resource is held by Quad-City Times and is provided here by RICHES for educational purposes only. 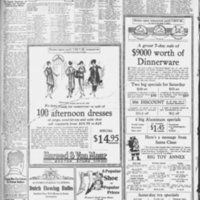