The Thirteenth United States Census records for Boston, Massachusetts, for 1910. The census divides the population by categories of sex, race, age, marital status, number of children, occupation, literacy, whether they owned or rented, farm or house, if they were a Civil War veteran, and whether they were blind, deaf or dumb. A question was added regarding the place of birth and mother tongue of foreign-born persons and their parents. If foreign born, the person was required to provide the year they immigrated, whether they were naturalized and if they were able to speak English.

A notable resident listed in this record was Henry Lawrence Gau (1899-1988). Henry Lawrence Gau was born to Paul and Ann Gau in Chelsea, Massachusetts, on October 7, 1899. Both of Gau’s parents were immigrants who moved here from Germany and Canada. Gau had three siblings: Laura, Preston, and Chester. On June 6, 1917, Gau joined the United States Navy. While serving in World War I, Gau worked on the USS Carola and patrolled the coasts of France. In early 1920, Gau returned to live with his family. He married his second wife, Elizabeth, in August of 1937. Gau joined the Army in 1939 at the age of forty to serve in World War II, where he rose to the rank of Lieutenant Colonel. He also later served in the Korean War. Gau moved to Florida in his later years, where he met and married his third wife, Mildred. They lived at Sun City Center, a retirement community on Florida’s West coast, where Gau joined the community’s Retired Officers Association. Gau was buried at the Florida National Cemetery in Bushnell, Florida, in 1988. His wife joined him in 1996. 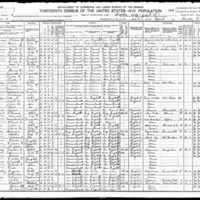