The Irénée Du Pont, which was an American Steam merchant C-2 class ship. Florida veteran, Otis Francis Potts, served on the Irénée Du Pont around 1942 as a Armed Naval Guard for the civilian vessel. The vessel visited places such as London, United Kingdom, Cape Town, South Africa, and Karachi, Pakistan, in its effort to supply the Allied forces with various goods at the Karachi Airfield. A U-boat sank the Irénée Du Pont on March 17, 1943.

Otis Francis Potts, otherwise known as “Lucky,” was born on October 8, 1923, to Helen Merrit and Lester Potts. The family moved from his birthplace of Perry, Florida, to Washington, North Carolina, by 1930. Potts joined the United States Navy on September 19, 1941, in Raleigh, North Carolina. He served as a Naval Armed Guard for civilian transport and merchant ships, supplying the Allied war effort. Potts was discharged as Gunner’s Mate 3rd Class Petty Officer in 1945. After the war, he joined the construction business as a general contractor. He married Norma Kendall after the war, and they had a daughter in 1963. Potts passed away on April 26, 1996 and is buried in the Florida National Cemetery in Bushnell, Florida. 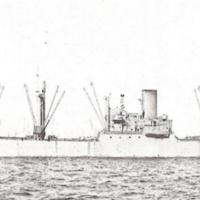