The Fifteenth United States census records for Brooklyn, New York, for 1930. The census divides the population into categories of name, age, sex, race, marital status, occupants and relation to head of house, whether the home is owned or rented, value of home or rent, whether home is a farm residence, and whether the home has a radio. It also records college attendance, literacy, birthplace and birthplace of parents, citizenship status, language spoken before coming to United States, year of immigration, occupation or business, class of worker, whether they worked the previous day, military status, and the war or expedition participated in. A notable resident listed in this record is Harry Gittleman. According to the record, Gittleman and his family resided on Christopher Avenue in Brooklyn, New York. Members of Gittleman’s family include his father, Meyer, mother, Lena, and older sisters Frances and Anna. The census states that his father was from Poland and was working as a tailor in 1930. It lists his mother as having immigrated to the United States from Austria.

Harry Gittleman was born in New York in 1916, and grew up with his family in Brooklyn. His parents were Jewish immigrants from Europe, who immigrated to the United States in the early 1900s. Gittleman served in the United States Army during World War II. He began his military service in March of 1943, and served until August of the same year. He eventually moved to Florida, where he owned a clothing boutique in Tamarac. Gittleman passed away in 1995, and is buried in Florida National Cemetery in Bushnell, Florida, with his wife, Anne Molly Gittleman. 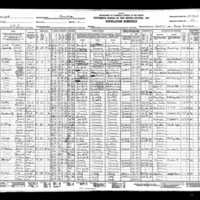