The draft registration card for John M. Antuono. The card includes name in full, age in years, home town, date of birth, citizenship status, place of birth, present trade, employer, place of employment, dependents, marriage status, race, prior military service, and exemption claims. The back of the form lists the description of the recruit including size, eye and hair color and physical ailments, including if the person lost any limbs.

John M. Antuono was born in Port Tampa, Florida, to Italian immigrants, Vincent and Christina Antuono. Antuono was drafted into the United States Army on October 8, 1917, and served in several units. He served in Europe with the 324th Infantry, which was part of the 81st Division. He left the military on September 3, 1919. After his service, Antuono held several jobs involving the cigar industry and bookkeeping, until his death on March 20, 1992. He is buried in the Florida National Cemetery in Bushnell, Florida. 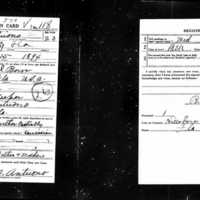