The Twelfth United States Census records for Waltham City, Middlesex County, Massachusetts, for 1900. The census divides the population by sex, race, age, marital status, number of children, occupation, literacy, whether they owned or rented, farm or house. The census also states a resident's place of birth, and birthplace of their mother and father. If foreign born, the person provided the year they immigrated, whether they were naturalized and if they spoke English.

A notable resident listed in this record is Mary Sutherland. Born on November 1, 1895, in Watertown, Massachusetts, Sutherland later moved to Palm Bay, Florida. Sutherland joined the US Navy on September 3, 1918 as a Yeoman F 1st Class. Sutherland returned from serving in the Navy just in time to be able to vote for the first time. She had three children, John, Richard, and Marilyn, as well as thirteen grandchildren and six great-grandchildren. Sutherland died September 28, 1988, and was laid to rest in Florida National Cemetery in Bushnell, Florida. 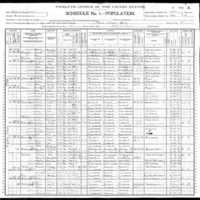