The draft registration card for William Kirlew. The card lists the name of the recruit, their age, place of residence, date and place of birth, country of citizenship, father’s birthplace, occupation and location of occupation and the nearest relative and their address. The back of the form lists the description of the recruit including size, eye and hair color and physical ailments. 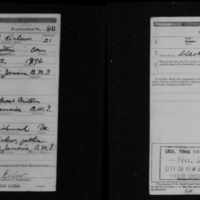