The Report of Changes listing the Navy personnel on the USS Beaverhead on March 8, 1946. The form includes the names and ranks of the personnel on board the final report. The Navy decommissioned the ship after more than a year of service in the Pacific. The ship eventually docked in Norfolk, Virginia.

A notable person listed on the muster roll is John Andes. Andres was born in Paris, France, on August 9, 1926. After immigrating to Queens, New York with his parents, Andes enlisted in the United States Navy at the age of seventeen, with his parents’ permission. After his training, he received his assignment aboard the USS Beaverhead on January 3, 1945. The ship served in the Pacific until March 8, 1946. Initially starting as a Fireman Second Class (F2c), by the time of the ships decommissioning, Andres held the rank of Motor Machinist’s Mate Third Class (MOMM3). After the war, Andres returned to New York, marrying Joan Marguerite Keast having one son Jack and two daughters, Yvonne and Susette. He worked as an electrical engineer for Burroughs Corporation, one of the innovators in early computing technology. In 1988, he and his family moved from Elmont, New York, to New Port Richey, Florida. On May 12, 1996, Andres died at the age of sixty-nine. He is buried in the Florida National Cemetery in Bushnell. 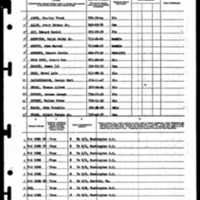