The Sixteenth Unites States Census records for Richmond City, New York, Queens Borough, New York, in 1940. The census divides the population by name, age, sex, race, marital status, residence, home owned or rented, value of home or monthly rent, whether living on a farm, other residents of same address, relation to head of house, attended school or college after March 1940, highest grade completed, state or foreign country of birth, employment status, hours of work per week, duration of employment, and wages. Supplemental questions include the father and mother's birthplace, language spoken in home during childhood, veteran status, father's veteran status, social security, usual occupation and industry, class of worker, if women have been married more than once, age at first marriage if so, and number of children born.

A notable resident in this record is John Marcel Andres (1926-1996). Andres was born in Paris, France, on August 9, 1926. After immigrating to Queens, New York with his parents, Andes enlisted in the United States Navy at the age of seventeen, with his parents’ permission. After his training, he received his assignment aboard the USS Beaverhead on January 3, 1945. The ship served in the Pacific until March 8, 1946. Initially starting as a Fireman Second Class (F2c), by the time of the ships decommissioning, Andres held the rank of Motor Machinist’s Mate Third Class (MOMM3). After the war, Andres returned to New York, marrying Joan Marguerite Keast having one son Jack and two daughters, Yvonne and Susette. He worked as an electrical engineer for Burroughs Corporation, one of the innovators in early computing technology. In 1988, he and his family moved from Elmont, New York, to New Port Richey, Florida. On May 12, 1996, Andres died at the age of sixty-nine. He is buried in the Florida National Cemetery in Bushnell.

Originally created by Beatrice B. Edwards and published by the United States Census Bureau. 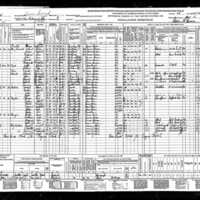