The abstract of World War I military service for John M. Antuono (1894 – 1992). The document includes Antuono’s surname, Christian name, Army serial number, whether White or Colored, home address, place of enlistment, place of birth, date of birth, organizations served in, with dates of assignments and transfers, grades, with date of appointment, engagement, wounds or injuries received in action, dates served overseas, date of discharge, and remarks.

Antuono was born in Port Tampa, Florida, to Italian immigrants, Vincent and Christina Antuono. He was drafted into the United States Army on October 8, 1917, and served in several units in Europe with the 324th Infantry, part of the 81st Division. After his service ended on September 3, 1919, Antuono held several jobs involving the cigar industry and book keeping until his death on March 20, 1992. He is buried at the Florida National Cemetery in Bushnell. 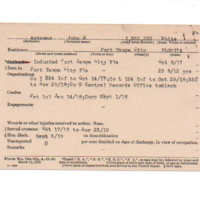