The Population of the United States Census for Manhattan, New York, New York, for 1905. The census divides the population by categories of
sex, race, age, marital status, number of children, occupation, literacy, whether they owned or rented, farm or house, if they were a Civil War veteran, and whether they were blind, deaf or dumb. A question was added regarding the place of birth and mother tongue of foreign-born persons and their parents. If foreign born, the person was required to provide the year they immigrated, whether they were naturalized and if they were able to speak English.

A notable resident listed in this record is Max Blum. Born in 1895, Blum and his family lived on East 45th Street in Manhattan. His parents immigrated to the United States from Germany in the late nineteenth century. His father, Edward Blum, worked as a butcher, and his mother, Tobina Blum, was a housewife. His brother, Joseph, worked as a jeweler’s apprentice. And his brother, Robert, worked as a printer’s helper. Blum served in the United States Army during World War I. His military service began in July of 1918, and he served in the Quartermaster Corps until April of 1919. After his military service, he had a career as a window trimmer and continued to live in New York. Later in life, he moved to Leesburg, Florida, where he was active in Veterans organizations. Blum passed away in 1989 and is buried at Florida National Cemetery in Bushnell. 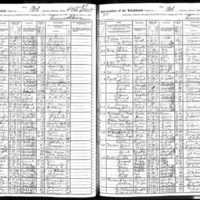