The abstract of World War I military service for Private Max Blum. The document includes Blum’s surname, Christian name, Army serial number, whether White or Colored, home address, place of enlistment, place of birth, date of birth, organizations served in, with dates of assignments and transfers, grades, with date of appointment, engagement, wounds or injuries received in action, dates served overseas, date of discharge, and remarks.

Max Blum was born in 1895 in New York City. He grew up in a Jewish family to parents who had immigrated to the United States from Germany. Blum served in the United States Army during World War I. His military service began in July of 1918, and he served in the Quartermaster Corps until April of 1919. After his military service, he had a career as a window trimmer in New York. Later in life, he moved to Leesburg, Florida, where he was active in Veterans organizations. Blum passed away in 1989, and is buried at Florida National Cemetery in Bushnell. 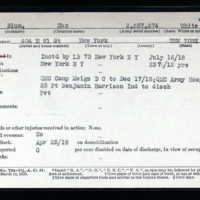 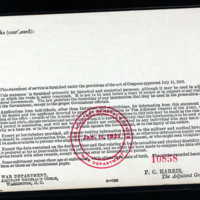