The draft registration card for Rufe Goins, who enlisted in the United States military during World War I. The card contains the demographic information for the soldier including name, age, home address, date of birth, place of birth, race, citizenship, trade or occupation, number of dependents, whether tall, medium, or short, slender, medium, or stout, eye and hair color, whether bald, and disabilities. World War I draft registration cards were completed by approximately 24 million men living in the U.S. in 1917 and 1918. Goins registered for the draft on June 5, 1917.

On May 29, 1912, at the age of twenty-one, Goins enlisted in the United States Army. He served in the 19th Infantry Regiment in Texas for several years. At the time of Goins’s service, the United States was engaged in war with Mexico. During this war, the United States Army garrisoned American border towns, constructed forts alongside the border, and fought against Pancho Villa, a notable Mexican revolutionary. Goins was honorably discharged on May 28, 1915. When the United States entered World War I, Goins re-enlisted in the Army on October 30, 1917. He served for two years and reached the rank of Private before being released on June 20, 1919. Goins served more than half a year past the end of the war in November 1918. He died on December 25, 1988, in Tampa, Florida, at the age of 94, and is buried at the Florida National Cemetery in Bushnell. His wife, Maude, died ten years later and is buried with him. 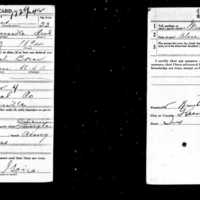