A photograph of Rufe Goins (center, left), his wife, Maude (center, right), as well as relatives Wayne (left) and Gertrude (right). The photograph was taken in Tampa, Florida, where Goins and his wife retired in 1959. On May 29, 1912, at the age of twenty-one, Goins enlisted in the United States Army. He served in the 19th Infantry Regiment in Texas for several years. At the time of his service, the United States was engaged in war with Mexico. The United States Army garrisoned American border towns, constructed forts alongside the border, and fought against Pancho Villa, a notable Mexican revolutionary. Goins was honorably discharged on May 28, 1915. When the United States entered World War I, Goins re-enlisted in the Army on October 30, 1917. He served for two years and reached the rank of Private before being released on June 20, 1919. Goins served more than half a year past the end of the war in November 1918. He died on December 25, 1988, in Tampa, Florida, at the age of 94, and is buried at the Florida National Cemetery in Bushnell. His wife, Maude, died ten years later and is buried with him.

Originally created by the Goins Family.

Copyright to this resource is held by the Goins Family and is provided here by RICHES for educational purposes only.

Private collection of the Goins Family 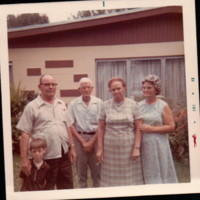