The passenger list of organizations and casuals for the SS Aurania on January 8, 1918. The document includes the soldier's number, name, rank, regiment, corps or department, emergency contact, and address.

A notable soldier listed in the record is Francis Clayton Gerould (1900-1989). Born in Athens, Pennsylvania, on January 19, 1900, Gerould enlisted in the United States Army on July 8, 1916, at the age of sixteen. He joined the 5th Cavalry and participated in the occupation of Northern Mexico during the Mexican Civil War. When the United States entered World War I, he was transferred to the 1st Caisson Company of the 2nd Train Division. He helped move supplies from Central France to the front lines in the final months of the war. He continued to serve in the Army reserve for the next forty years of his life. By the time he passed away on January 7, 1989, Gerould had achieved the rank of Master Sergeant. He was laid to rest in Florida National Cemetery in Bushnell, and was joined by his wife Gertrude on February 8, 2000. 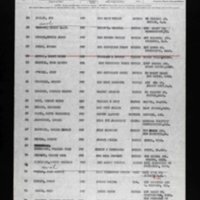