The draft registration card for Robert Gerlach, who enlisted in the United States Army during World War I. The card contains the demographic information for the soldier including name, age, home address, date of birth, place of birth, race, citizenship, trade or occupation, number of dependents, whether tall, medium, or short, slender, medium, or stout, eye and hair color, whether bald, and disabilities. World War I draft registration cards were completed by approximately 24 million men living in the U.S. in 1917 and 1918.

Born on November 29, 1896, in Rhine, Wisconsin, Robert Gerlach entered the United States Army on May 28, 1918. He was released from service as a private on November 27, 1918. Nine months after their marriage, Evelyn gave birth to their daughter, Joy Evelyn Gerlach. The couple moved to Citrus, Florida, in the 1980s. Evelyn passed away on February 17, 1988. Joy died two years later, in July 1990. Robert moved back to Wisconsin, where he lived out the remainder of his days in Waupaca until his death on February 17, 1993, at the age of ninety-six. He was subsequently interred at the Florida National Cemetery in Bushnell on March 5, 1993, joining his wife and daughter. 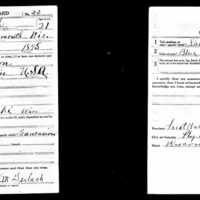