A statue known as "The Mariner", which was erected in 1978 by Earl J. LaPan (1908-1996). The fourteen-foot statue was created for the Mariner Bank in 1978, who paid $18,000 for it. When the bank closed, the statue was loaded by crane and moved to Phil Foster Park in Riviera Beach, Florida, in 1983. The Mariner was built in tribute to Jerry Thomas, who founded Mariner Bank in 1962. Thomas’s son, Ken, claimed his father had been the model.

Born in Lowell, Massachusetts, on August 24, 1908, Earl J. LaPan was an accomplished artist, who is credited for creating over 300 murals depicting tropical scenes. Beginning his career as an artist in New Jersey, Earl LaPan moved to Florida sometime around 1933. He was drafted into the United States Army Air Corps on October 29, 1943. After World War II, LaPan moved to Miami, Florida, where he resumed his work as an artist. LaPan died in Palm Beach, Florida, on February 19, 1996, at the age of eighty-seven. He is buried at the Florida National Cemetery in Bushnell, Florida.

Originally created and published by The Palm Beach County.

Copyright to this resource is held by The Palm Beach Post and is provided here by RICHES for educational purposes only. 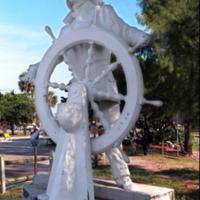