SEMINOLE COUNTY HISTORIC MARKER
GEORGETOWN:
The community of Georgetown, a suburb east of Sanford Avenue, and north of Celery Avenue was established circa to the early black pioneers who had made their way from Virginia, the Carolinas, West Florida and as far away as the West Indies.
In 1885, the first Georgetown school was located at the northeast corner of Seventh and Cypress Avenue. It was founded with $100 from the school board. Mr. McLester was the first principal, followed by Mr. Reed and later by Mr. J. N. Crooms, who founded Crooms Academy.
Some of the first Sanford businesses owned by black settlers were in Tuckertown, which would later become the business district of Georgetown. In 1887, there were twenty-eight registered voters. Between 1887 and 1923 Georgetown supported five ( Continued on other side)
GEORGETOWN:
(continued from other side)
barbers, a blacksmith, a butcher, a dentist, five dress makers, two draymen, seven farmers, a general store, three dry goods and millinery,five hand laundries, two pharmacists, five postal workers, three realtor, three restaurant owners, five taxi drivers, a theater, undertakers and many churches. Circa 1915, families began to move out of the area for opportunities elsewhere.

Family roots were planted and today the properties of many early settlers are still owned by the second and third generations. This community bonded families and persons into building a neighborhood for the future. 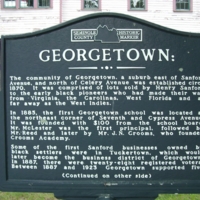 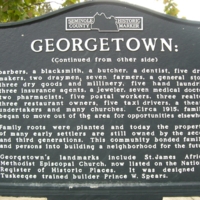