The twenty-third issue in the twelfth volume of The Watermark was published on November 17, 2005, and covers relevant news in the LGBTQ+ (Lesbian, Gay, Bisexual, Trans, Queer/Questioning, and others) community. The cover story features the cast of RENT, a film based on the musical of the same name. Other stories include the trial of Steven Lorenzo, a man accused of nine accounts of date rape and the murder of two Tampa Bay men, the recent developments in adoption laws, festivities and holiday support groups, St. Petersburg city council elections, and the impact of Hurricane Wilma. The issue features interviews with Dolly Parton, Eartha Kitt and the cast of RENT. It also provides information on discrimination laws and recent development in AIDS home testing. This issue of The Watermark deals heavily with the concept of gay culture, social injustice and its lasting impact on LGBTQ+ individuals. 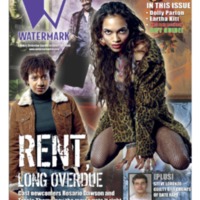