The tenth issue of the twelfth volume of The Watermark was published on May 19, 2005, and covered stories related to the local, national, and international LGBTQ+ (Lesbian, Gay, Bisexual, Trans, Queer/Questioning, and others) communities. Topics include the opening of a new Kissimmee bar, the death of community pioneer Jack Nichols (1938-2005), the overturning of a Nebraska state amendment that would have banned gay marriage, and the homophobia of Catholic priests in Spain. There is also an interview with Betty White (b. 1922), coverage of an AIDS protest outside the White House, and a look into the annual Orlando Fringe Festival. Although the "Editor's Desk" section mentions that this issue has 88 pages, the largest of 2005, there are only 48 pages available. 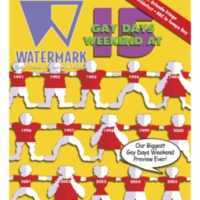