The ninth issue of the twelfth volume of The Watermark was published on May 5, 2005, and was the paper's Business and Finance issue. This section of the paper analyzes the incomes and spending patterns of LGBTQ+ (Lesbian, Gay, Bisexual, Trans, Queer/Questioning, and others) readers, spotlighting several Central Florida businesses, and providing information on bankruptcy laws. The issue also covers the openly lesbian, newly appointed head of the Universal Fellowship of Metropolitan Community Churches (UFMCC), same-sex legislative rulings in various states such as Texas, and Microsoft's reversal of support for a law that would have protected LGBTQ+ individuals. Other topics include an ongoing investigation of a man charged with the kidnapping, assault, and murders of numerous gay men, as well as the prohibition of students from wearing pro-gay apparel in a number of schools. 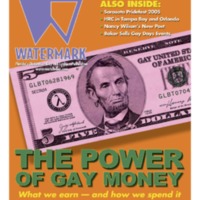