The draft registration card for Buster Williams (1887-1945). The card contains the demographic information for the soldier including name, age, home address, date of birth, place of birth, race, citizenship, trade or occupation, number of dependents, whether tall, medium, or short, slender, medium, or stout, eye and hair color, whether bald, and disabilities. World War I draft registration cards were completed by approximately 24 million men living in the United States in 1917 and 1918.

Buster Williams was born on December 16, 1887, in Barnwell, South Carolina. He worked as a farmer in Elkton, Florida, before being drafted into the United States Army in St. Augustine, Florida, on June 19, 1918. Williams served for about two months in the 135th Depot Brigade, a unit responsible for processing and training new recruits. From August 18, 1918, until the end of the war, he was part of Company B of the 536th Engineers Service Battalion. The 536th boarded their ship for France on August 26, 1918. The unit likely worked at the St. Aignan depot, where they would have been responsible for loading and unloading equipment and serving in primarily a support capacity. Once the war ended, Williams returned to Florida, where he married his wife, Ethel, and had three children. Williams worked as a laborer for a cemetery. He, his wife, and his son-in-law remained in the same house until Williams's death on December 28, 1945. He is buried in the St. Augustine National Cemetery. 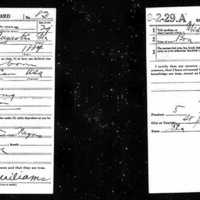