"The interment control form for Will Johnson (1889-1942). Interment cards are control forms for burial lots in national cemeteries. They provide the details of name, rank, serial number, unit(s) and war(s) served in, discharge, death, interment date, gravesite, and next of kin when possible. According to his card, Johnson served in World War I as part of the 315th Labor Battalion, was discharged on July 29, 1919, and died September 17, 1942. His next of kin was unavailable, and his religious mark for the headstone could not be determined.

Born on July 6, 1889, in Wilmington, North Carolina, Johnson eventually moved to Georgia. Before the war, he married his wife, Hattie Hokes. After registering for the draft, Johnson joined the United States Army at Camp Gordon on July 17, 1918. Although he began his service in the 15th Depot Brigade, he became part of Company D of the 315th Labor Battalion on August 29, 1918. The unit boarded the USS Orizaba on September 4, 1918, to depart for France. Johnson and his unit remained in France after the war, leaving on July 7, 1919, from St. Nazaire. The Army discharged Johnson on July 29, 1919. He died on September 17, 1942, and is buried in the St. Augustine National Cemetery at Plot D, Grave 11.

In 2017, the University of Central Florida was one of three universities selected to launch the National Cemetery Administration’s Veterans Legacy Program Project. The program engaged a team of scholars to make the life stories of veterans buried in the Florida National Cemetery available to the public. The project engages UCF students in research and writing and fosters collaboration between students, faculty and local Central Florida schools to produce interactive curriculum for k-12 students. The corresponding website exhibit uses RICHES Mosaic Interface to create a digital archive of related data. The public can use the project-developed augmented-reality app at more than 100 gravesites at the Florida National Cemetery, where they can access the UCF student-authored biographies of veterans."

Originally created by James W. Dell and published by the Office of the Quartermaster General. 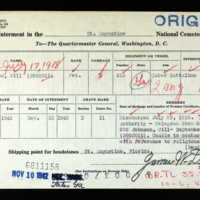