An outgoing United States Army passenger list of organizations and casuals from Hoboken, New Jersey, in 1918. The United States Army Transport Service (ATS) compiled records of all persons who passed through United States and foreign ports via ATS ships, incoming as well as outgoing. Information included the name of the sip, the arrival or departure date and place, the servicemember's rank, age, regiment, and next of kin, and a non-servicemember's relation to a servicemember. The ship, the USS Orizaba, departed from Hoboken, New Jersey, for France in early September 1918.

A notable soldier listed is Will Johnson (1889-1942). Born on July 6, 1889, in Wilmington, North Carolina, Johnson eventually moved to Georgia. Before the war, he married his wife, Hattie Hokes. After registering for the draft, Johnson joined the United States Army at Camp Gordon on July 17, 1918. Although he began his service in the 15th Depot Brigade, he became part of Company D of the 315th Labor Battalion on August 29, 1918. The unit boarded the USS Orizaba on September 4, 1918, to depart for France. Johnson and his unit remained in France after the war, leaving on July 7, 1919, from St. Nazaire. The Army discharged Johnson on July 29, 1919. He died on September 17, 1942, and is buried in the St. Augustine National Cemetery at Plot D, Grave 11.

Originally created and published by the Office of the Quartermaster General. 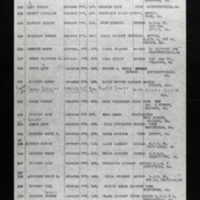