A 1918 draft list for Sandersville, Georgia. Approximately 24 million men registered for the draft in 1917 and 1918. Those who were drafted reported to their local draft boards before traveling to camp for training. Each local board created forms to keep track of draftees and ensure that they reported for duty. Form 1029 PMGO included the draftee's name, serial number, classification and other identifying information. On this form, Eddie Landrum (1899-1937) is listed with order number 2090, serial number 515, and Classification I, which meant that he was immediately eligible for service. He would report to Camp Gordon for training.

Elijah "Eddie" L. Landrum was born on July 3, 1899, in Sandersville, Georgia. Like his father, Landrum was a farmer before the war. As he was under the age of twenty-one, Landrum listed his birth year as 1895 in order to register for the draft when the United States entered World War I. On August 22, 1918, Landrum was drafted for service and sent to train at Camp Gordon, Georgia. He served as part of the 157th Depot Brigade, which remained in the United States to receive, train and uniform new recruits who would be sent to fight on the front lines in France. After the war, Landrum was discharged and returned to his work as a farmer. He married and eventually settled in St. Augustine, Florida. On March 24, 1937, Eddie Landrum passed away and was buried in the St. Augustine National Cemetery in Section A Grave 208. 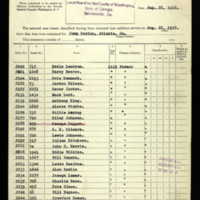