Internment in the St. Augustine Cemetery

The interment card for Eddie Landrum (1899-1937). Interment cards are control forms for burial lots in national cemeteries. They provide the details of name, birth, rank, serial number, units and wars served in, enlistment, discharge, death, interment date, gravesite and next of kin. According to this card, Eddie Landrum served in the 42nd Company, 157th Depot Brigade as a Private. He was inducted on August 22, 1918, given an honorable discharge on February 21, 1919, and died March 24, 1937.

Elijah "Eddie" L. Landrum was born on July 3, 1899, in Sandersville, Georgia. Like his father, Landrum was a farmer before the war. As he was under the age of twenty-one, Landrum listed his birth year as 1895 in order to register for the draft when the United States entered World War I. On August 22, 1918, Landrum was drafted for service and sent to train at Camp Gordon, Georgia. He served as part of the 157th Depot Brigade, which remained in the United States to receive, train and uniform new recruits who would be sent to fight on the front lines in France. After the war, Landrum was discharged and returned to his work as a farmer. He married and eventually settled in St. Augustine, Florida. On March 24, 1937, Eddie Landrum passed away and was buried in the St. Augustine National Cemetery in Section A Grave 208.

Originally created and published by the Office of the Quartermaster General, Memorial Division. 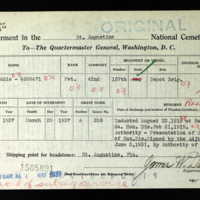