The Thirteenth United States Census for Orange, Liberty, Florida, for 1910. The census divides the population by sex, race, age, marital status, number of children, occupation, literacy, whether they owned or rented, farm or house, if they were a Civil War veteran, whether they were blind, deaf or dumb, the place of birth and mother tongue of foreign-born persons and their parents. If foreign born, the person was required to provide the year they immigrated, whether they were naturalized and if they were able to speak English.

A notable resident listed in this record is Nelson Mullin (1887-1944). Born on July 21, 1887, in Camilla, Georgia, Mullin eventually moved to Florida, where he worked as a laborer. In 1909, he married his wife, Clara, and the two had a daughter. Mullin was inducted into the Army on June 21, 1918. He first served as part of Company D of the 520th Engineers Service Battalion. He was transferred to the 522nd Engineers in August 1918. From the beginning of 1919 until his discharge on February 15, 1919, Mullin served in the Supply Company of the 368th Infantry. He passed away on July 16, 1944, and was buried in the St. Augustine National Cemetery in Florida, at Section D Grave 38.

Originally created and published by the United States Census Bureau 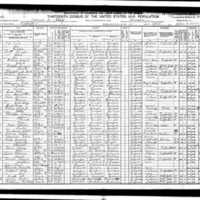