The abstract of World War I military service for Nelson Mullin (1887-1944). The document includes name, date and place of birth, race, units and ranks, dates overseas, and date of discharge.

Born on July 21, 1887, in Camilla, Georgia, Mullin eventually moved to Florida, where he worked as a laborer. In 1909, he married his wife, Clara, and the two had a daughter. Mullin was inducted into the Army on June 21, 1918. He first served as part of Company D of the 520th Engineers Service Battalion. He was transferred to the 522nd Engineers in August 1918. From the beginning of 1919 until his discharge on February 15, 1919, Mullin served in the Supply Company of the 368th Infantry. He passed away on July 16, 1944, and was buried in the St. Augustine National Cemetery in Florida, at Section D Grave 38. 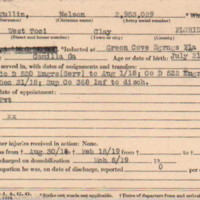