The abstract of World War I military service for Fred White (1898-1919). The document includes Antuono’s surname, Christian name, Army serial number, whether White or Colored, home address, place of enlistment, place of birth, date of birth, organizations served in, with dates of assignments and transfers, grades, with date of appointment, engagement, wounds or injuries received in action, dates served overseas, date of discharge, and remarks.

Fred White was born on March 14, 1898, in Marianna, Florida, and was raised by his grandparents. He moved to Youngstown in neighboring Bay County, where he worked as a laborer. On June 5, 1918, he registered for the draft, adding a year to his age to make himself eligible. On June 15, he married Mamie Grey Kennedy. Two months later, on August 21, White was inducted into the United States Army and trained at Camp Joseph E. Johnston. He joined Company C of the 547th Engineer Service Battalion and departed for France on October 27, 1918. After the war, White succumbed to the influenza epidemic of 1918-1919 on February 1, 1919. White is buried in the Meuse-Argonne American Cemetery in Romange-sous-Montfaucon, France, at Plot C Row 7 Grave 3. 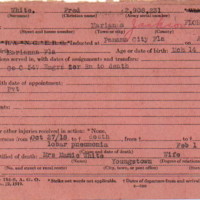