The Twelfth United States census records for Union, Suwannee, Florida, for 1900. The census divides the population by sex, race, age, marital status, number of children, occupation, literacy, whether they owned or rented, farm or house. The census also states a resident's place of birth, and birthplace of their mother and father. If foreign born, the person provided the year they immigrated, whether they were naturalized and if they spoke English.

A notable resident listed in the record is Riley Wright (1893-1919). Wright was likely born in 1893, although some documents list his birth year as 1895, near Falmouth in Suwannee County in Northern Florida. Like his father and grandfather before him, Wright worked as a farmer. He married Eva Coleman on April 15, 1917, and was drafted on August 3, 1918, joining the 807th Pioneer Infantry unit. In France, Wright and his unit served in a technical capacity, constructing and repairing roads, bridges and railways. Though the Army did not consider these infantry units as combat units, their work on the front lines brought them in direct contact with the enemy. The 807th participated in the Meuse-Argonne Offensive, which was the last major engagement of the war. Wright survived the offensive. However, he succumbed to influenza on January 7, 1919. He is buried in the Meuse-Argonne American Cemetery at Plot H Row 10 Grave 28 in Romagne-sous-Montfaucon, France. 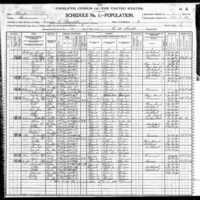