A program for the Orlando Gay Chorus' collaboration concert with the Tampa Bay Gay Men's Chorus, "United in Pride", on June 15, 1991, at the Beacham Theatre. The program includes brief biographies of Music Directors Dr. Charles Callahan and Kenneth D. Williams, and Accompanist Terry E. Thomas, a brief history of the Orlando Gay Chorus and the Tampa Bay Gay Men's Chorus, program notes, an outline of the show's itinerary, how to join the chorus, a description of GALA choruses, an events calendar, a list of the chorus members, how to become a contributor, and a checklist of concert etiquette. It also contains a "weekly specials" menu from the Parliament House Orlando. This was the first program to include advertisements and a donors' list. 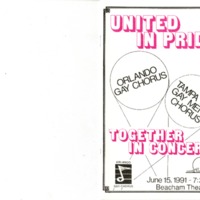